“Early on December 14th, Kalley and Andrew Heiligenthal’s beautiful little girl, Olive Alayne, unexpectedly stopped breathing in her sleep, organizers of a GoFundMe Campaign wrote on a crowdfunding page set up on the family’s behalf. “She was 2 years old, vivacious, full of wonder, full of life.”
EXCERPTS ABOVE FROM: https://foreverymom.com/faith/bethel-singer-kalley-heiligenthal-resurrection-prayer-wake-up-olive/
Redding police are investigating the death, which occurred sometime between Friday night and early Saturday morning. The child’s body remains at the Shasta County coroner’s office.

The Shasta County Coroner’s Office did not respond to a request for confirmation of the child’s death on Wednesday, but Torum said the child’s body was taken to the coroner, explaining that bodies are sent to there “in all cases of death where an autopsy will be performed.”
Torum said police are looking into the child’s death.


“If it’s unexpected, we’ll open up a case to figure out how the death occurred,” Torum said. “It’s by no means at this point a suspicious death — but we still have to investigate to see what happened.” 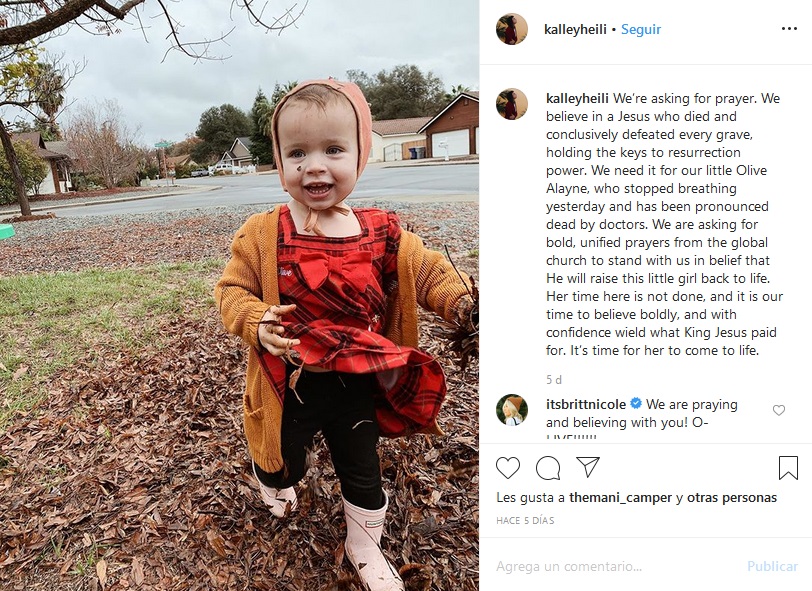 WAKE UP OLIVE?
WAKE UP BETHEL!
BY CHRIS ROSEBROUGH
OF FIGHTING FOR THE FAITH
PROOF BETHEL EMBRACES
THE PELAGIAN HERESY
When Heaven Invades Earth: An Honest Look at Bill Johnson's Teachings... And Why it Matters

On December 16th, 2019, The church's Instagram account bethelmusicbelievers posted a video of a speaker calling for the resurrection of Olive (show below). The video accumulated over 19,190 likes in two days.

On December 16th, Instagram user dominishahbon posted a video of a church gathering with the caption "I’ll never forget tonight. @kalleyheili leading us in worship and contending for the RESURRECTION of her daughter, Olive Alayne Heiligenthal!! Can’t explain much, but all i know is God is on the move. KEEP PRAYING CHURCH!! #WakeUpOlive" which received over 14,300 likes in two days. On December 17th, kalleyheili posted to Instagram gained with the caption "Day 4 is a really good day for resurrection. All hail, make way for King Jesus! Thank you so much for joining your faith to ours, we feel your strength and radical belief. Keep declaring life over Olive Alayne with us. “It is finished” were His last words before bursting back in resurrection life, so we’re not done. It is finished, so we’re not done. This is awakening. Come alive, Olive!" (shown below, right). The video garnered over 85,500 likes in two days.

OUR PREVIOUS POSTS ABOUT BETHEL:
https://ratherexposethem.blogspot.com/search?q=BETHEL