PENSACOLA, FLORIDA: THE DEATH OF U.S. TROOPS AT THE HANDS OF ALLAH 
THE DEATH OF U.S. TROOPS
AT THE HANDS OF ALLAH

The suspect who opened fire at NAS Pensacola on Friday morning used a handgun, Escambia County Sheriff David Morgan said during an afternoon press conference. The sheriff said that four people are confirmed dead, including the shooter, and eight more are injured.

BY ROBERT SPENCER
SEE: https://www.jihadwatch.org/2019/12/six-saudi-muslims-arrested-near-naval-air-station-after-jihad-attack-three-of-them-filmed-the-massacre; republished below in full unedited for informational, educational and research purposes:
There needs to be a thorough and realistic reevaluation of this training program of foreign nationals. But that probably will not happen; it would be “Islamophobic.” 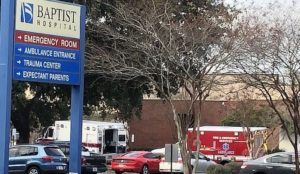 “Six Saudis are arrested over Pensacola naval base shooting including three who FILMED the attack by countryman who killed three and wounded eight before being shot dead – as FBI probes terror link,” by Andrew Court and Snejana Farberov, Dailymail.com, December 6, 2019:

The Air Force trainee who killed three and injured eight when he opened fire at a naval base in Florida assailed the United States as ‘a nation of evil’ before he went on his shooting rampage, AFP reports.
The man, first identified by NBC News as Saudi national Mohammed Saeed Alshamrani, opened fire inside a classroom at Naval Air Station in Pensacola early Friday morning. Police quickly responded to the scene and he was shot dead.
US officials, who spoke on condition of anonymity to discuss an ongoing investigation, said the suspect was a second lieutenant attending the aviation school at the base.
Meanwhile six other Saudi nationals were arrested near the base shortly after the attack, as investigators began to probe a terror link.
Three of the six were seen filming the entire incident as it unfolded, a source told The New York Times on Friday evening…. 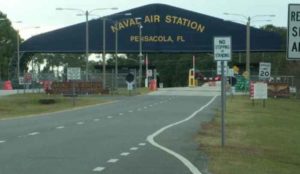 The gunman who killed at least three people and wounded seven others before being killed by deputies in a Friday morning shooting at Naval Air Station Pensacola has been identified as a Saudi national and member of the Saudi Arabian military who was in the U.S. for aviation training. His name is Mohammed Saeed Alshamrani, according to NBC News. The shooting is being investigated as a possible terror attack.
The assailant opened fire in a classroom building killing at least three and wounding seven others.
Two deputies engaged and dispatched the shooter, both of them sustaining gunshot wounds during the shootout…

Pensacola jihad murderer tweeted that US was committing “crimes against Muslims,” including support of Israel

Pensacola jihadi ranted about “crimes against Muslims,” investigators trying to determine if he had religious motive

https://www.jihadwatch.org/2019/12/pensacola-jihadi-ranted-about-crimes-against-muslims-investigators-trying-to-determine-if-he-had-religious-motive
Posted by John at 12:46 PM