ISLAMIC STATE IMPRISONED JIHADISTS ASKING TO COME HOME WITH AIDS, HEPATITIS; ONE SAYS "MY ORGANS ARE SPILLING OUT"

ISLAMIC STATE IMPRISONED JIHADISTS ASKING TO COME HOME WITH AIDS, HEPATITIS; ONE SAYS
"MY ORGANS ARE SPILLING OUT"
BY CHRISTINE DOUGLASS-WILLIAMS
SEE: https://www.jihadwatch.org/2019/11/islamic-state-imprisoned-jihadists-asking-to-come-home-with-aids-hepatitis-one-says-my-organs-are-spilling-out;
republished below in full unedited for informational, educational and research purposes:
We elect globalist leaders who implement policies of open-door immigration. In doing so, they are failing to protect free societies from the encroachment of the Sharia. They fail to take seriously issues of national security and the threat of jihad. They fail to consider who is paying (and how) for the surge in the number of improperly vetted refugees. And now, major health issues among the migrants are a new concern; this should have been obvious a long time ago.
Diseased and wounded Islamic State terrorists under Kurdish custody in Syria are requesting to be returned home to the West…Among the aforementioned Islamic terrorists are persons infected with HIV/AIDS and hepatitis.
These jihadists are spreading diseases among themselves and others.
One Muslim migrant from Syria was graphic. Aballah Nooman from Belgium stated: “I want to leave the prison and go back home to my family..… I want to go back to Britain…My organs are spilling out.” He was referring to “an open wound he said he sustained from a fellow jihadist who accidentally shot him while cleaning his weapon.” We also know that jihadists have infiltrated the refugee stream, and that Western countries have been losing track of migrants; that is no surprise, given the size of the influx.
All of a sudden, jihadists call the West “home” when they find themselves in a dreadful bind, as Nooman and many others do. They do not ever regard the Western countries that once nurtured them as home, but instead, as part of the House of War to be conquered. They see the West as enemy territory and tell lies when it suits them, because they know that social justice warriors — whom they deem to be inferior and stupid — will believe their lies and advocate for them. They know that these same social justice warriors will be fixated on them rather than on the innocent victims whom they viciously abused and murdered. And they are right. They also know that they will continue their jihad against the West once they are allowed back in, and they will spread whatever diseases they carry. 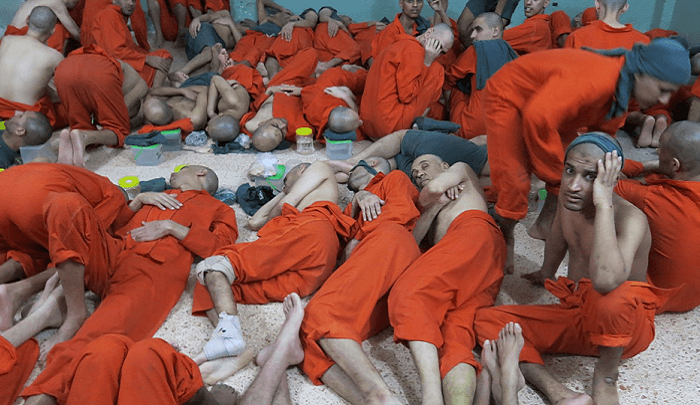 Diseased and wounded Islamic State terrorists under Kurdish custody in Syria are requesting to be returned home to the West, the Agence-France Presse (AFP) reported on Tuesday.
Among the aforementioned Islamic terrorists are persons infected with HIV/AIDS and hepatitis, according to the AFP. Some injured terrorists “have “organs spilling out of open wounds,” AFP noted.
The AFP was granted access to the Kurdish-run detention facility in Hasakeh, a city in northern Syria.
Among the detained Islamic terrorists are teenagers and men who, according to Kurdish sources, represent over 50 nationalities.
According to Kurdish forces, the final territorial remnant of ISIS’s Islamic “caliphate” in eastern Syria was liberated in March when approximately 2,000 ISIS jihadists surrendered to the Syrian Democratic Forces, a U.S.-allied coalition largely made up of Kurdish fighters.
Since stripping ISIS of its control of its “capital” Raqqa in 2018 with the help of U.S. air support, Syrian Democratic Forces have continued in intermittent conflict with remaining jihadis still present there. Those under custody in northwest Syrian Kurdistan (Rojava) are demanding to go back to the nations they abandoned to join the establishment of the caliphate.
“I want to leave the prison and go back home to my family. … I want to go back to Britain,” said 22-year-old Aseel Mathan.
“My organs are spilling out,” said Aballah Nooman, a Belgian national, who lifted his shirt to reveal an open wound he said he sustained from a fellow jihadist who accidentally shot him while cleaning his weapon.
A 42-year-old ISIS terrorist told the AFP that he deceived his wife into traveling to the “caliphate” by promising her a vacation in Turkey:…..