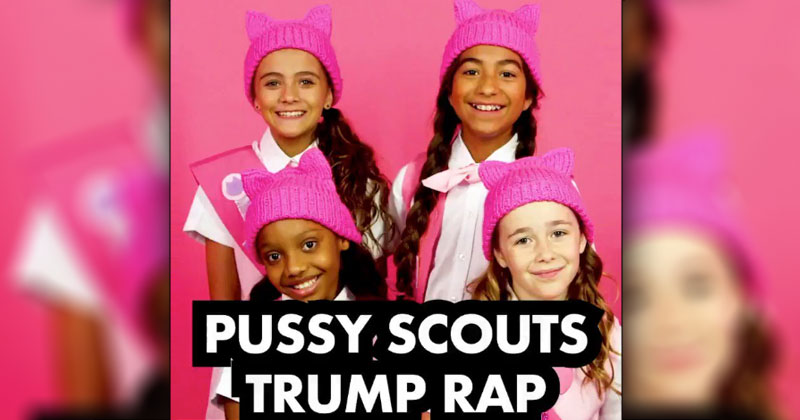 SEE: https://www.infowars.com/cringe-pre-teen-pussy-scouts-rap-about-racist-dick-trump/; republished below in full unedited for informational, educational and research purposes:
Pre-pubescent girls wearing “pussy” hats rap about President Trump being a “racist” and a “dick,” in a throwback video illustrating the disturbing depths of Trump Derangement Syndrome.
The cringe video produced two years ago by deranged anti-Trump leftist activist group FCKH8.com is being recycled on social media, and shows an all-female children’s group named “Pussy Scouts” spitting a rap containing weak rhymes, including:
“Ya call women ‘fat pigs,’ show no respect. Try to grab my pussy? Ya gonna get wrecked.”

Sick and disturbing! Where are the parents? Trump Derangement is out of control!

“Cuttin’ Planned Parenthood healthcare? An agenda more fucked than your fucked-up hair,” a girl no older than 8-years-old curses while holding the middle finger up on both hands.
In another offbeat lyric, a young girl raps about her “bitch” Elizabeth Warren taking Trump out:
“And take away a woman’s abortion right? My bitch Liz Warren will take you down in a fight.”
The group FCKH8.com describes itself as a “T-shirt company on a mission to inspire social change,” but so far it only seems to be promoting foul-mouthed children singing about assaulting the President of the United States.
The group also ran a campaign titled “Dicks against a sexist dick,” featuring naked gay men making penis puns in reference to President Trump.
FCKH8.com’s parent company, Good Ideas for Good Causes, has received an “F” rating by the Better Business Bureau after numerous consumer complaints went unresolved.
The company also has ties to the DeportRacism.com PAC, through LGBT activist Luke Montgomery, which had Latino children read profanity-laden scripts labeling then-GOP frontrunner Donald Trump a “racist.”