ALGERIA: POLICE KICK CHRISTIANS OUT OF CHURCHES DAYS AFTER PROTESTS OVER GOVERNMENT CRACKDOWN ON HOUSES OF WORSHIP

ALGERIA: POLICE KICK CHRISTIANS OUT OF CHURCHES DAYS AFTER PROTESTS OVER GOVERNMENT CRACKDOWN ON HOUSES OF WORSHIP
BY CHRISTINE DOUGLASS-WILLIAMS
SEE: https://www.jihadwatch.org/2019/10/algeria-police-kick-christians-out-of-churches-days-after-protests-over-government-crackdown-on-houses-of-worship
republished below in full unedited for informational, educational and research purposes:
Persecution of Christians is intensifying in Algeria, with increasing church closures and backlash by Muslim families against Christians who are open about their faith. In a recent incident, “Christians in north-central Algeria were kicked out of their churches by police just days after many faithful protested the government’s crackdown on houses of worship.”
“The influence and activity of radical Islamic groups” also pose an additional danger to Christians, and it doesn’t stop there as persecution rises in the country. Authorities are also targeting Christians using Algeria’s blasphemy laws, which are similar to Pakistan’s. Christians have been accused of blasphemy just for being Christian.
In Algeria, it’s forbidden by law to “shake the faith” of a Muslim or to use “means of seduction” to convert a Muslim to another religion.
Black slaves are also being held in Algeria. Racism is so endemic that the New York Times published an article “Black in Algeria? Then You’d Better Be Muslim.” Why? Because then at least if you’re a black Muslim in Nigeria, you might appeal to the sympathies of the rest of the Muslim population.
The plight of Christians and blacks in Islamic Algeria is, as usual, being ignored by Western “human rights” groups and so-called anti-hate networks, because they’re too busy slamming critics of Islam and branding them “Islamophobic” to really care about human rights. 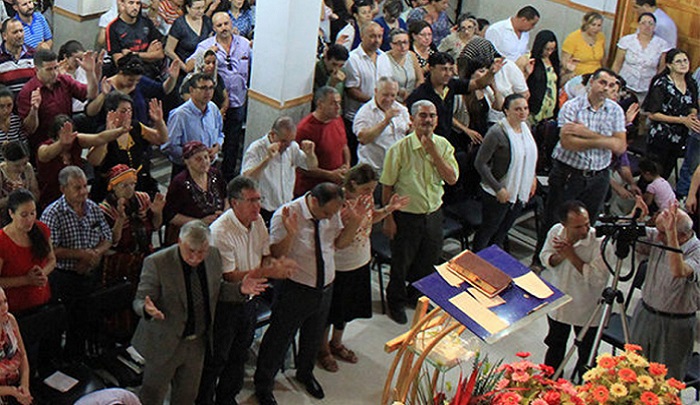 Christians in north-central Algeria were kicked out of their churches by police just days after many faithful protested the government’s crackdown on houses of worship.
Christian Solidarity Worldwide, a U.K.-based nongovernmental organization that monitors persecution in 20 countries and has consultative status with the U.N., reports that three Algerian Christian churches have been shut down this month.
According to CSW, the number of churches that have been shut down in Algeria so far this year has risen to at least eight.
Since 2017, waves of church closures have been carried out by authorities in the Muslim-majority country on the basis of a 2006 law that requires all non-Islamic places of worship to be authorized by a national government agency.
Critics say that that agency, the National Commission for Non-Muslim Worship, does not actually meet and therefore, applications to build new churches are not considered.
On Wednesday, police shut down The Light Church in the city of Tizi Ouzou in north-central Algeria and evicted worshipers from the church.
The forced closure of The Light Church follows the closing of two other churches this week: Protestant Church of the Full Gospel in Tizi Ouzou and Source of Life Church in the Tizi Ouzou suburb of Makouda….