SWEDISH SWIMMING FEDERATION CHAIR RESIGNS AFTER BACKLASH TO HER STATEMENT THAT
VEIL (HIJAB) IS "SYMBOL OF REPRESSION"
BY ROBERT SPENCER
SEE: https://www.jihadwatch.org/2019/02/swedish-swimming-federation-chair-resigns-after-backlash-to-her-statement-that-veil-is-symbol-of-repression;
republished below in full unedited for informational, educational and research purposes:
As I’ve pointed out ad infinitum, any opposition to jihad mass murder and/or Sharia oppression of women is now immediately branded as “hate,” “bigotry,” and “Islamophobia,” and leads to public disgrace and career ruin. People who think I’m exaggerating, and that this treatment is only meted out to genuine bigots, should ponder this story very carefully.
For the question must be asked, although no one in the establishment media in Sweden or anywhere else will ask it: is the veil a symbol of repression, or isn’t it? Do the people who forced Ulla Gustavsson to resign care about Aqsa Parvez, whose Muslim father choked her to death with her hijab after she refused to wear it. Or Amina Muse Ali, a Christian woman in Somalia whom Muslims murdered because she wasn’t wearing a hijab? Have they shown any concern for the 40 women who were murdered in Iraq in 2007 for not wearing the hijab; or for Alya Al-Safar, whose Muslim cousin threatened to kill her and harm her family because she stopped wearing the hijab in Britain; or for Amira Osman Hamid, who faced whipping in Sudan for refusing to wear the hijab; or for the Egyptian girl, also named Amira, who committed suicide after being brutalized by her family for refusing to wear the hijab; or for the Muslim and non-Muslim teachers at the Islamic College of South Australia who were told they had to wear the hijab or be fired; or for the women in Chechnya whom police shot with paintballs because they weren’t wearing hijab; or for the women in Chechnya who were threatened by men with automatic rifles for not wearing hijab; or for the elementary school teachers in Tunisia who were threatened with death for not wearing hijab; or for the Syrian schoolgirls who were forbidden to go to school unless they wore hijab; or for the women in Gaza whom Hamas has forced to wear hijab; or for the women in Iran who protested against the regime, even before the recent uprising, by daring to take off their hijabs; or for the women in London whom Muslim thugs threatened to murder if they didn’t wear hijab; or for the anonymous young Muslim woman who doffed her hijab outside her home and started living a double life in fear of her parents; or for the fifteen girls in Saudi Arabia who were killed when the religious police wouldn’t let them leave their burning school building because they had taken off their hijabs in their all-female environment; or for the girl in Italy whose mother shaved her head for not wearing hijab; or for all the other women and girls who have been killed or threatened, or who live in fear for daring not to wear the hijab?
Courageous women in the Islamic Republic of Iran are taking off their hijabs as a sign of resistance to the oppressive Sharia regime under which they live, and at least 29 women have been arrested for doing so. Who is standing in solidarity with them? Not the people who made sure Ulla Gustavsson was punished for speaking out about this repression. 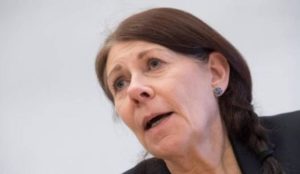 “Swedish Swimming Federation chair resigns after backlash to claiming veil is ‘symbol of repression,'” by Michael Pavitt, Inside the Games, February 18, 2019 (thanks to Bob):

Swedish Swimming Federation (SSF) chair Ulla Gustavsson has resigned following a backlash to her comments that a veil was a “symbol of repression”.
Gustavsson’s made the comment in an interview, where she criticised an advert that showed a boy and a Muslim girl participating in shooting competitions, with the latter wearing a veil.
“Everything should not be shown,” Gustavsson said, according to Swedish newspaper Aftonbladet.
“If they want to show girls with an immigrant background, it can be done without them having a veil.
“Now, [it] shows that they like and encourage honour repression: genital mutilation, child marriage, honour violence.
“That upset me.
“The veil is a religious, political and sexist garment.
“In the Swedish National Sports Association’s values, gender equality is important and the veil stands for something else.
“When such images are displayed, they normalise repression.”
The Swedish Swimming Federation have distance themselves from Gustavsson’s comments, with reports in the country that the official had been dismissed from her position.
The Federation later claimed that Gustavsson had chosen to resign following the controversy.
“Ulla Gustavsson has a big heart for Swedish swimming, and we are grateful for the work she has put into the movement, both nationally and internationally,” Stefan Persson, the Federation’s vice-chair, said.
“But the Swedish Swimming Federation board takes the recent debate very seriously, and has come to the conclusion that there are no longer conditions for Ulla Gustavsson to successfully lead the Swedish Swim Association.
“Ulla Gustavsson has, therefore, chosen to resign as chairman of the Board.
“Her personal perceptions and statements contrast with the Swedish Swim Federation’s strategy and basic view that all children should fit in our activities on equal terms.”…