POPE FRANCIS TELLS ISLAMIC IMAM WHO WANTS TO KILL CHRISTIAN CONVERTS "YOU'RE MY BROTHER___"~130,000 ATTEND HIS PAGAN MASS OF DECEPTION

The Grand Sheikh Francis of al-Vatican

POPE CALLS FOR CATHOLICS AND MUSLIMS TO
"ENTER THE ARK OF FRATERNITY"
IN OPPOSITION TO THE TRUE GOSPEL;
BUT FREEMASONS ARE PLEASED
SEE: https://www.lifesitenews.com/news/popes-claim-that-god-wills-many-religions-seems-to-overturn-gospel-church-h
(written from a Catholic perspective)

POPE FRANCIS TELLS ISLAMIC IMAM WHO WANTS TO KILL CHRISTIAN CONVERTS "YOU'RE MY BROTHER___"
SEE: https://pulpitandpen.org/2019/02/04/pope-francis-tells-islamic-imam-who-wants-to-kill-christian-converts-youre-my-brother/;  republished below in full unedited for informational, educational and research purposes:
Practitioners of Islam use ‘Interfaith Dialogue’ as an intentional strategy to win the hearts and minds of professing Christians and to reaffirm the faith of questioning Muslims. The practice is called Dawah, and unsuspecting people happily engage in Interfaith Dialogue with Muslims, either ignorant of their tactics or self-assured in their own hubris, convinced of their inability to be suckered.
Dawah is no conspiracy, and is taught boldly as an Islamic “evangelism” (that term does not quite fit) strategy of Muslims. From the Imams Online website…

[Speaking of Dawa] This then constitutes the core and the essence of Islam. Other Abrahamic faiths will also find resonance in these core beliefs. A true Muslim who loves God and the Messenger (peace be upon him) and who knows salvation can only be achieved through devotion and good work, he is truly God conscious. The God bound and God conscious soul feels a gentle urge to take the faith to others…The spirit of this witnessing is one of sharing, learning from others and being a pilgrim with fellow believers. This “invitation” and “giving good news” is to be taken with the spirit of meeting fellow humans both Muslims and non-Muslims. It is for building trust and mutual understanding and to remove stereotypes. This spirit of witnessing builds trust and brings people together to work for the common good.

Pope Francis, who as the Bishop of Rome views himself as the de facto representative of Christ on Earth, landed in Abu Dhabi on Sunday for the first-ever papal trip to the Arabian Peninsula. The purpose of the event was for the Pope to meet with Ahmed el-Tayeb, the Grand Imam of al-Azhar, for an Interfaith Dialogue to unite Roman Catholicism and Islam.

Francis is engaging in a conference on interreligious dialogue sponsored the Emirates-based Muslim Council of Elders, the purpose of which was to promote what is considered a more “moderate brand of Islam.” Sheikh Ahmed el-Tayeb is an Imam of Sunni Islam and trains clerics and scholars from around the world.
Prior to leaving for the United Arab Emirates, Francis did a video praising his “friend and dear brother,” el-Tayeb, and congratulated him for calling the meeting to assert that “God unites and doesn’t divide.”

“I am pleased with this meeting offered by the Lord to write, on your dear land, a new page in the history of relations among religions and confirm that we are brothers despite our differences.”

The supposedly “moderate” el-Tayeb is on record calling for the death of any Muslim who leaves the Islamic faith for Christianity. The Imam’s desire to kill Christian converts came as recently as 2016.
El-Tayeb affirmed on his television show during the 2016 Ramadan celebration, “Contemporary apostasy presents itself in the guise of crimes, assaults, and grand treason, so we deal with it now as a crime that must be opposed and punished…. Those learned in Islam [al-fuqaha] and the imams of the four schools of jurisprudence consider apostasy a crime and agree that the apostate must either renounce his apostasy or else be killed.“
Despite him being an enemy of the Christian church, the Pope still referred to el-Tayeb as his brother.
___________________________________________________________________ 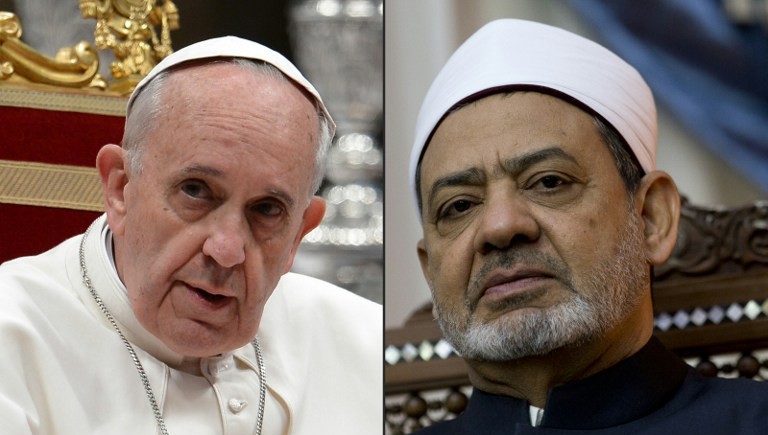 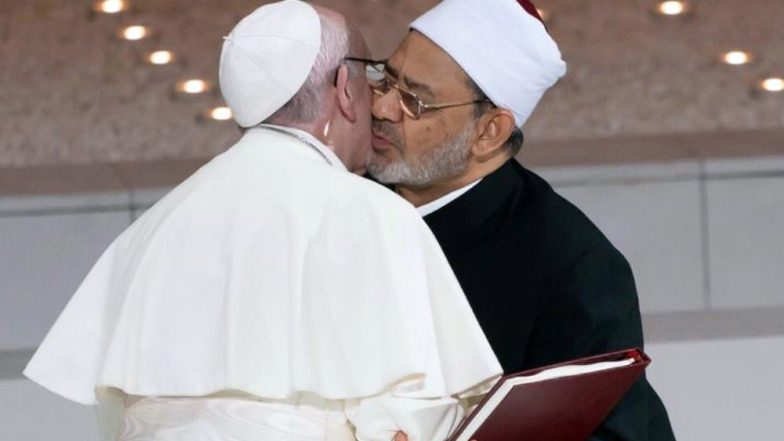 Pope and Al-Azhar Grand Sheikh: Terrorism due to “incorrect interpretations of religious texts” and poverty

But el-Tayeb said this as recently as 2016: "Contemporary apostasy presents itself in the guise of crimes, assaults, and grand treason, so we deal with it now as a crime that must be opposed and punished….Those learned in Islamic law and the imams of the four schools of jurisprudence consider apostasy a crime and agree that the apostate must either renounce his apostasy or else be killed."Has el-Tayeb renounced this view? Doubtful, since it is standard Islam. The death penalty for apostasy is part of Islamic law. It’s based on the Qur’an: