CNN HITS HEATHER NAUERT FOR INTERVIEWING ROBERT SPENCER & OTHER FOES OF JIHAD TERROR, BUT CNN FEATURED THEM ALSO
BY ROBERT SPENCER
SEE: https://www.jihadwatch.org/2019/02/cnn-hits-heather-nauert-for-interviewing-robert-spencer-and-other-foes-of-jihad-terror-but-cnn-featured-them-also; republished below in full unedited for informational, educational and research purposes:
CNN is trying to destroy Trump’s pick for UN ambassador, Heather Nauert, by noting that in 2009, she featured Frank Gaffney, Tarek Fatah and me on Fox News. But I was on CNN six years after that, in 2015. So once again the fake news propagandists at CNN trip on their own feet. But it is a sad indication of how much the public discourse in America has degenerated that CNN propagandist Andrew Kaczynski would even consider the possibility that it would hurt Nauert to try to associate her with foes of jihad mass murder and Sharia oppression of women, gays, and others. The fact that opposing jihad terror carries a stigma in the public square today is an illustration of the insidious power of propaganda, and an indication that some extremely insidious forces are operating at CNN and other establishment media outlets.
This problem is compounded by cowardice on the other side. “State Department deputy spokesman Robert Palladino told CNN in a statement that interviewing guests ‘does not mean the moderator agrees with the views expressed’ and added that CNN itself has interviewed those same people.”
What Palladino should have said is that the interviewees were opponents of jihad terror and Sharia oppression, and defenders of human rights for all people, and anyone who thought that was wrong was suffering from extreme moral confusion. 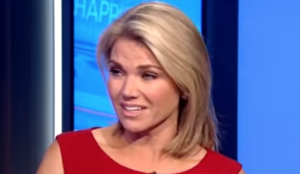 CNN launched an attack on President Donald Trump’s pick for United Nations ambassador, Heather Nauert, that inadvertently turned the microscope on itself.
Nauert, a former Fox News host, was nominated for the UN post vacated by Nikki Haley in December. Since then, news outlets have raised questions about her qualifications for office and her time working for Fox. In a story published Monday, CNN claimed that Nauert’s confirmation process could be complicated because she hosted a “panel on Sharia law conspiracies” on the network in 2009.
The panel was on a webcast called “Terror from Within” and featured anti-jihad activists Frank Gaffney and Robert Spencer, and Canadian journalist and Muslim critic Tarek Fatah.
State Department deputy spokesman Robert Palladino told CNN in a statement that interviewing guests “does not mean the moderator agrees with the views expressed” and added that CNN itself has interviewed those same people.
A review of interviews on CNN reveals that they have, in fact, interviewed Gaffney, Spencer and Fateh on multiple occasions. CNN’s most recent interview with Spencer occurred in 2015 — six years after Nauert interviewed him for the webcast.
During a June 2015 interview, Spencer clashed with the CNN hosts after he accused the media of kowtowing to radical violent Islamists and argued that Muslims in Boston weren’t doing a good enough job of countering extremists in their faith.
Gaffney appeared on CNN for an interview as recently as 2013 about U.S. relations with the Iranian regime. He was also interviewed on Syria in 2012 and debated American Conservative Union board member Suhail Khan in 2011….
CNN gave Nauert credit for “ask[ing] clarifying questions and push[ing] her guests to specify that not all Muslims support extremism or Sharia law,” a similar rhetorical move used by CNN anchors in their interviews with Spencer. However, CNN claimed that Nauert was not tough enough on her guests, stating that she did not attack the “broader theme” of their comments….