Good to see that this initiative wasn’t decried as “Islamophobic.” 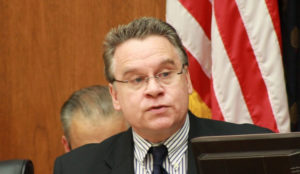 
WASHINGTON, D.C.— Rep. Chris Smith’s (R-NJ) legislation to provide humanitarian relief to genocide victims in Iraq and Syria, and hold ISIS perpetrators accountable—HR 390, the Iraq and Syria Genocide Relief and Accountability Act of 2018—passed the House on Tuesday night and now heads to the President’s desk to be signed into law, after over two years in the making.

“When genocide or other atrocity crimes are perpetrated, the United States should direct humanitarian, stabilization, and recovery aid to enable these people to survive–especially when they are minorities whose existence as a people is at-risk,” Smith stated on the House Floor before the vote. “HR 390 would ensure our actions match our words.” (Click here to read excerpts of Rep. Smith’s Floor remarks.)

Less than 200,000 Christians remain in Iraq, down from 1.4 million in 2002 and 500,000 in 2013, before ISIS swept through the region on its genocidal campaign. Many of the remaining Christians in Iraq are displaced, mostly in Erbil in the Kurdistan region, and need assistance to return to their homes and stay in Iraq. After the ISIS invasion, 60,000 Yazidis fled to Europe, and of the 550,000 Yazidis still in Iraq, 280,000 remain displaced and only 20 percent have been able to return to their historic homeland of Sinjar, according to the Yazdi organization Yazda. Those displaced will also need assistance to return to their homes.
Smith introduced the legislation in 2016 and again in 2017, with lead Democratic cosponsor Rep. Anna Eshoo (D-CA). “Tens of thousands of religious and ethnic minorities in Iraq and Syria were targeted for genocide by ISIS between 2014 and 2017,” Rep. Eshoo said. “As survivors return to their homes and begin rebuilding their communities, the United States government must make it a priority to help families in need of assistance now, while ensuring the perpetrators of these crimes against humanity are held accountable. H.R. 390 will aid in these efforts and send a powerful message to these communities that we haven’t forgotten them. I thank Chairman Smith for his passionate leadership on this issue and I look forward to the President swiftly signing this legislation into law.”
Among other key provisions, H.R. 390 authorizes and directs the Administration to:
Encourage foreign governments to add identifying information about suspected ISIS perpetrators to their security databases and security screening and to apprehend and prosecute perpetrators__.
Posted by John at 11:55 AM