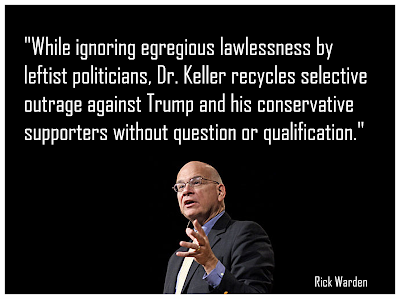 TIM KELLER PROMOTES GLOBALISM
AT THE "GOSPEL" COALITION
SEE: https://pulpitandpen.org/2018/12/13/tim-keller-promotes-globalism-at-the-gospel-coalition/;
Tim Keller is a Marxist
That should come as no surprise to anyone who has the vaguest understanding of the economic and political philosophy or with the vaguest grasp of Keller’s body of work. This is not conspiratorial, this is an assessment of Keller’s own very explicit words and his extremely evident worldview. As a Marxist, Keller eschews nationalism, which is the bulwark and champion of personal freedom, civil rights, and individual liberties.
Globalism, as it is most commonly defined, is a rejection of the nation-state, or at the least, the subjection of the nation-state to international law and international governing bodies. Globalism is an aspiration of Marxism, which seeks to dismantle personal freedom as supported by national governments in the name of communitarian utilitarianism.
Tim Keller did an interview with the Gospel Coalition, the audio of which you can find here. The grotesquely liberal Relevant Magazine lauded Keller’s words and called it a “takedown of Nationalism.”
Nationalism, although liberals have sought to redefine it over the course of the last two years, refers to the traditional belief in Western Civilization that personal individual liberty is best preserved by nation-states who have a vested interest in the freedom of their Citizenry. Far from representing some kind of latent ethnocentricty or racism, Nationalism simply recognizes that civil liberties must be protected by localized – and not international – governments. Anyone who cares about the rights, liberties, and equality of minorities should be a nationalist. Anyone who cares about individual religious liberty or freedom of speech, assembly, or petition should be a Nationalist.
For Keller, however, Nationalism is evil. The world must operate internationally, not nationally. For Keller, the world’s geopolitical design must undergo significant renovation.
Citing his new book, The Prodigal Prophet: Jonah and the Mystery of God’s Mercy, Keller claimed that “border security” isn’t wrong per se (he is against border walls), but claimed that there must be “balance.”


I do think most thoughtful, balanced Christians should feel somewhat uncomfortable in either political party. Christians need to recognize the danger of what they call xenophobia. I’m afraid of Christians getting too radicalized on either side.

Keller no doubt feels uncomfortable in either political party because he’s a social conservative (barely), at least acknowledging the sinfulness of abortion, but a Marxist on economic and cultural issues.
In April of 2018, Keller met with a Marxist political braintrust at Wheaton College to discuss ways to keep evangelicals from voting Republican. In order for Keller’s Democrat friends with their New York values to win their political battles, they don’t need evangelicals to vote Democrat. They just need us not to vote.


“Jonah was putting his national interest over the spiritual good of the people of Ninevah. God cares about all races and all people, and in the end, His church will consist of people from every tribe, people and nation. We can’t lift up one nation over other nations.”

Of course, the story of Jonah is not about border security. It’s not about Nationalism or Globalism. This is just part of the Social Gospel that is repeatedly eisegeted into every text that Keller handles.
In regards to missiology, Jonah stands out as the rare prophet who evangelized outside both the Northern or Southern Kingdom. He went to them. After all, that’s what missions is really about.
We would encourage evangelicals to be like Jonah when it comes to missions, and take the Gospel into Mexico and Central America. We would also encourage evangelicals to be like Nehemiah when it comes to border security, and build a wall.