TUCKER CARLSON'S EPIC TAKEDOWN OF CNN:
ONE OF "FREE SPEECH'S GREATEST ENEMIES"
‘CNN almost single-handedly led the campaign to have Alex Jones banished’
BY STEVE WATSON
SEE: https://www.infowars.com/watch-tucker-carlsons-epic-takedown-of-cnn-one-of-free-speechs-greatest-enemies/;
Tucker Carlson delivered a stunning monologue Wednesday, slamming CNN for posing as a champion of free speech, after the network spent months trying to have competitors silenced and banned.
Carlson addressed CNN’s lawsuit against the Trump administration for revoking Jim Acosta’s White House access.
“In the past couple of days, you’ve heard a lot of pumping and puffing about free speech and freedom of the press, and how those freedoms are currently imperiled by the White House, and to be clear, we are for free speech. Unfettered, absolute free speech.” Carlson urged.
“And we cannot help but notice that some of free speech’s greatest enemies are now posing as its defenders, all of a sudden.” he added.

And that’s when the smackdown commenced, with Tucker providing examples of CNN’s total hypocrisy when it comes to free speech.
“Take CNN, for example. It was a CNN that almost single-handedly led the campaign to have broadcaster Alex Jones banished from the Internet, on the grounds that they didn’t like what Jones had to say,” Tucker continued.
“Ultimately, CNN succeeded in doing that. The network convinced every major tech platform to ban Jones and his outlet, Infowars. You don’t have to like Alex Jones to see that as a terrifying loss for free speech, because it was exactly that. But CNN was not done trying to silence its critics.” Carlson further explained.
CNN is “claiming to defend free speech only when it is their free speech.” Tucker declared, noting that CNN also didn’t devote any airtime to even report on the US government forcing RT to register as a foreign agent under threat of imprisonment.
“Yes, Russia Today is owned by a foreign government. So is the BBC,” he said. “But because RT is owned by Russia, which the left believes got Donald Trump elected, it is fine with CNN if they are bullied and silenced.”
“Call CNN what you will,” Carlson said. “But don’t pretend they are defenders of the First Amendment. They are not.”
“To see a channel that has lobbied against the right of others to say what they think is true, to all of a sudden emerge as this defender of the First Amendment is nauseating.” Tucker added.
Carlson and his guest Victor Davis Hanson then discussed how the Obama administration actively spied on reporters.
“This is a violation of press freedom,” said Hanson. “We didn’t hear that.”
“CNN has argued that others should lose their voice, should be silenced, because they’re quote conspiracy theorists, but you’re listing conspiracy theories that they have promulgated on their air.” Carlson told his guest after Hanson cited examples of various attacks on the President by CNN talking heads.
Turning back to Acosta, Hanson addressed the CNN reporter’s infamous ‘chop’ to a female White House intern’s arm, and noted that “this particular time you went over the edge, you were disruptive you were rude, you took over an optional press conference. Nothing in the constitution says he has to have a press conference.”
Despite the tone of Carlson’s broadcast, Fox News released an earlier statement expressing support for CNN’s lawsuit, for which CNN thanked their rival network.

Fox News will file an amicus brief in support of @Acosta and CNN. Thank you @FoxNews! Statement from Jay Wallace below: 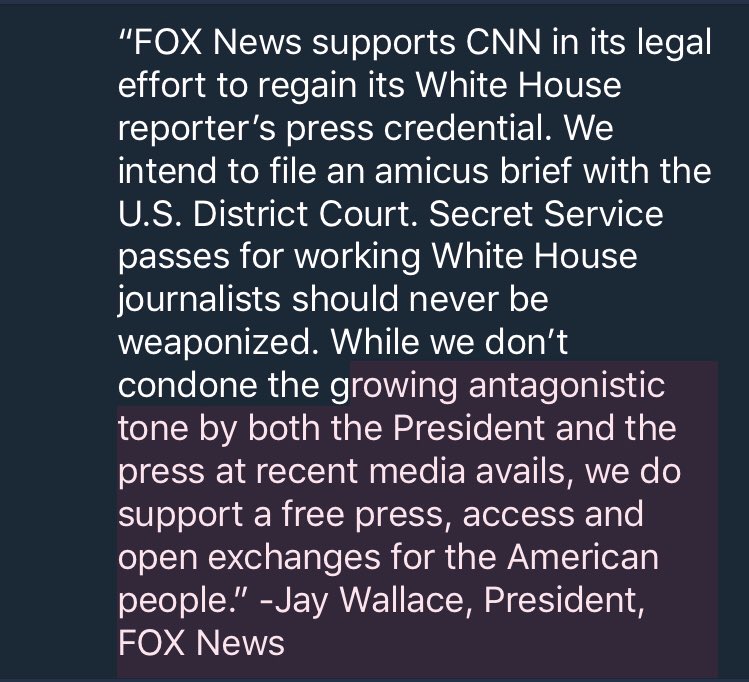