CALIFORNIA: DEMOCRAT AMMAR CAMPA-NAJJAR CALLED MUNICH JIHADIST GRANDFATHER A "HERO" & "LEGEND"
BY CHRISTINE DOUGLASS-WILLIAMS
SEE: https://www.jihadwatch.org/2018/10/democrat-ammar-campa-najjar-called-munich-jihadist-grandfather-a-hero-and-legend; republished below in full unedited for informational, educational and research purposes:
It should be expected that even after close to five decades, the Palestinian Authority and “Fatah still lauds its Olympics massacre”:
in Palestinian ideology the attack and the murders are presented as a “heroic” event to be proud of. Palestinian Media Watch has documented that both the PA and Fatah continuously glorify the terror attack, the terrorists themselves, and those who planned it.
Now comes acutely troubling news:
Democrat Ammar Campa-Najjar has deleted an Instagram post in which he referred to his grandfather, Palestinian terrorist Muhammad Yousef al-Najjar, as a “legend.”
Campa-Nijjar did not just reference his jihadist grandfather as a “legend” but also as a “hero”, all while he takes great pains to outwardly parade himself as peaceful and disassociates himself from his grandfather.
Ammar Campa-Najjar has also defended his donation to Hamas-linked CAIR. 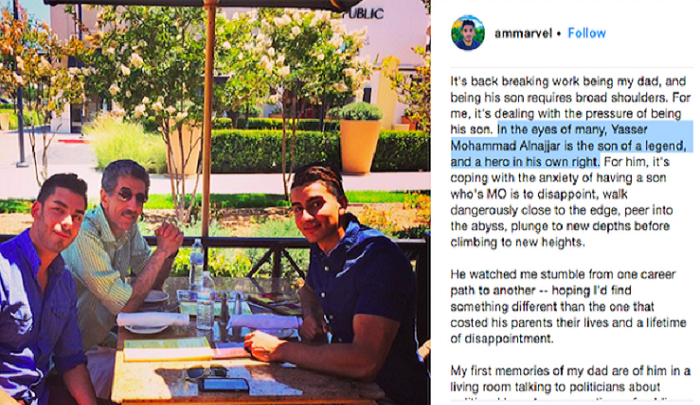 Democrat Ammar Campa-Najjar has deleted an Instagram post in which he referred to his grandfather, Palestinian terrorist Muhammad Yousef al-Najjar, as a “legend.”
Muhammad Yousef al-Najjar was “was “a senior member of the Palestinian terrorist group Black September that murdered 11 Israeli athletes at the 1972 Munich Olympics,” according to the Times of Israel, and a deputy for Palestine Liberation Organization (PLO) leader Yasser Arafat.
Earlier this year, when Campa-Najjar’s roots were first reported, he condemned his grandfather’s actions and supported peace.
But in a 2015 Instagram post praising his father, who is a former Palestinian Authority (PA) official and Palestinian ambassador, Campa-Najjar referred to his grandfather as a “legend.” He offered no criticism or condemnation of his grandfather’s terrorist acts.
Breitbart News reported the existence of that Instagram post on Monday, as well as another in which he noted that his family was close to Yasser Arafat’s. The Campa-Najjar campaign declined to comment, and by Tuesday both posts had been taken down, and the account made “private.” Both posts, however, survive as screen shots.
Campa-Najjar is pushing back against an effort by his opponent in California’s 50th congressional district, incumbent Rep. Duncan Hunter (R-CA), to portray him as a “security risk.”
Campa-Najjar changed his name after the June primary (from Ammar Yasser Najjar to Ammar Joseph Campa-Najjar); received a campaign donation from a Palestinian ambassador; and donated campaign funds to a radical group, CAIR, while taking donations from CAIR officials……

“Even after 46 years, Fatah still lauds its Olympics massacre: ‘Black September stunned the world and made it hold its breath for more than 12 hours,'” by Itamar Marcus and Nan Jacques Zilberdik, Palestinian Media Watch, October 18, 2018:

The world was enraged when 8 Palestinian terrorists from Fatah’s Black September took 11 Israeli athletes and coaches hostage at the Olympics in Munich on September 5, 1972, and later murdered them.
However, in Palestinian ideology the attack and the murders are presented as a “heroic” event to be proud of. Palestinian Media Watch has documented that both the PA and Fatah continuously glorify the terror attack, the terrorists themselves, and those who planned it.
On this year’s anniversary of the murders of the Israeli athletes, Abbas’ Fatah Movement posted a video that lauds the attack and praises Fatah’s terror organization Black September that planned and carried out the attack. Fatah introduced the video of what it called the “heroic operation” with the following words:
Posted text: “The 46th anniversary of the heroic operation #Munich #The_symbols_of_the_Fatah_Movement_Lebanon #Be_strong_and_brave_homeland”
Text on screen:“The time: Sept. 5-6, 1972The place: Germany, Munich – the Olympic VillageThe number: 8Visual: The eight terrorists who murdered 11 Israeli athletes in the 1972 Munich Olympics massacreCommander of the operation: Mahmoud Nazzal ‘Che’The goal: Capturing Israeli hostages to exchange them for Palestinian prisonersVisual: Head of the terror organization Black September Salah Khalaf and PLO chairman Yasser ArafatThe plan: Breaking into the Israeli delegation’s quarters in the Olympic VillageThe self-sacrificing fighters demanded the release of 200 Arab prisoners in the Israeli prisonsVisual: Defense Minister Moshe Dayan and Israeli Prime Minister Golda MeirIsrael refused to comply with the demands of the self-sacrificing fighters10:15 p.m.: Two helicopters with the self-sacrificing fighters and the hostages took off…