"In the meantime, we’re now discussing the potential gayness of puppets, and this news cycle has reached new, ridiculous lows."
PUPPETS ARE ASEXUAL,
WITHOUT A GENDER IDENTITY 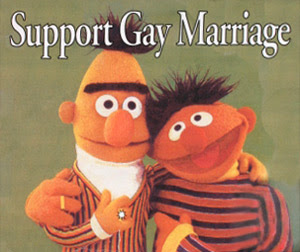 Saltzman said, “That’s what I had in my life, a Bert & Ernie relationship. How could it not permeate? So I don’t think I’d know how else to write them, but as a loving couple.”
However, the actual creator of the ‘Bert and Ernie’ characters disagreed immediately with the assertion.
Sesame Street Workshop and Muppet creator, Frank Oz, said Saltzman fabricated the story. Oz said via Twitter, “I created Bert. I know what and who he is.” Oz was the pulpiteer who played Bert, and is co-creator of the muppets with Jim Henson, who played Ernie.
Oz responded to the claims by Saltzman that the Bert-Ernie storylines had gay undertones with the Twitter version of an eye roll, saying, “Oh come on….”
While the sexual orientation of muppets who don’t exist from the waist down is probably a dumb discussion to be had altogether, there are people who really care about whether or not the felt-covered puppets were intended to represent sodomites. One such person who greatly cares about what happens in the fictional world of Bert and Ernie’s make-believe home is Pastor Stan Mitchell of GracePointe Church in Nashville, TN. GracePointe made national news recently for coming out in support of sodomy and promised to place sodomites at the highest level of service and leadership in their church.
Time Magazine reported at the time:

Our position that these siblings of ours, other than heterosexual, our position that these our siblings cannot have the full privileges of membership, but only partial membership, has changed,” he said, as many in the congregation stood to their feet in applause, and other sat in silence. “Full privileges are extended now to you with the same expectations of faithfulness, sobriety, holiness, wholeness, fidelity, godliness, skill, and willingness. That is expected of all. Full membership means being able to serve in leadership and give all of your gifts and to receive all the sacraments; not only communion and baptism, but child dedication and marriage.

Moving on to more important doctrinal issues, like the sexual orientation of muppets, Pastor Mitchell said the following on Facebook:

The Gospel, of course, is not that it’s “okay to be gay.” The Gospel is that Jesus died according to the Scripture, that he was buried, and according to the Scriptures he rose again from the dead (1 Corinthians 15:3-4). The Gospel’s command is to be baptized and repent on account of the forgiveness of our sins (Acts 2:42). And one of the things we should repent for, for those to whom it applies, is homosexuality (1 Corinthians 6:11).
The truth is, if Bert and Ernie were homosexuals, Stan Mitchell would probably not let them be alone with his children. In the meantime, we’re now discussing the potential gayness of puppets, and this news cycle has reached new, ridiculous lows.