US SUSPENDS MILITARY TRAINING PROGRAM FOR PAKISTAN
BY ROBERT SPENCER
SEE: https://www.jihadwatch.org/2018/08/us-suspends-military-training-program-for-pakistan; republished below in full unedited for informational, educational and research purposes:
President Trump tweeted in January: “The United States has foolishly given Pakistan more than 33 billion dollars in aid over the last 15 years, and they have given us nothing but lies & deceit, thinking of our leaders as fools. They give safe haven to the terrorists we hunt in Afghanistan, with little help. No more!”
For years I’ve been calling for an end to aid to Pakistan and a reconfiguration of our international alliances to reflect the reality of the global jihad. At last there is some movement in that direction. 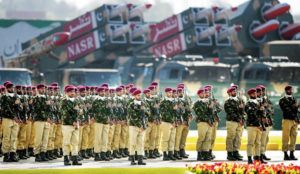 “US suspends military training program for Pakistan,” Anadolu Agency, August 12, 2018 (thanks to the Geller Report):

The United States has started cutting scores of Pakistani military officers from the education and training program, Pakistani media reported on Aug. 11.
The U.S. military institutions are “struggling” to fill the 66 slots, which they had kept aside for Pakistani officers, for next academic year, the daily Dawn quoted anonymous sources as saying.
The move comes a few days after Pakistan and Russia signed an agreement to allow Pakistani military officers to receive training in Russian military institutions.
“The fund for training Pakistani officers came from the U.S. government’s International Military Education and Training Program (IMET) but no funds were made available for Pakistan for the next academic year,” the daily reported.
Pakistani officers have been receiving military training and education in the U.S. since early 1960s, which were suspended in the 1990s. However, the U.S. government restored the program after the Sept. 11, 2001 terrorist attacks.
The U.S. State Department also confirmed the suspension of Pakistan’s participation in the training programs.
“So far, Pakistan’s participation in 97 training programs total valued at $3.29M has been cancelled, to include 66 IMET courses worth $2.41 million, 25 CTFP courses worth $37,000,” the State Department said in a statement.
However, it stressed that the U.S. “continues to provide civilian assistance to Pakistan in line with U.S. national interests.”…
On Jan. 1, Trump in a tweet accused Pakistan of playing a “double game” and providing sanctuaries to Taliban factions fighting American troops in neighboring Afghanistan. The tweet was followed by an aid cut which escalated tension between the allies in the U.S.-led war on terror.
Pakistan denies the charge saying it has already done “a lot” in war against terrorism, and will continue to do that but only in its own interest….