FRANCE VOWS PUSH BACK AGAINST NEW U.S. SANCTIONS ON THE ISLAMIC REPUBLIC OF IRAN

FRANCE VOWS PUSH BACK AGAINST
NEW U.S. SANCTIONS ON THE
ISLAMIC REPUBLIC OF IRAN
BY ROBERT SPENCER
SEE: https://www.jihadwatch.org/2018/05/france-vows-pushback-against-new-u-s-sanctions-on-the-islamic-republic-of-iran; republished below in full unedited for informational, educational, and research purposes:
Placing business interests above the interests of national and civilizational survival. 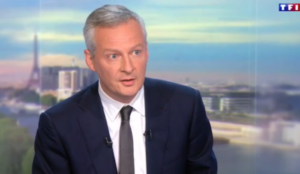 PARIS – France pledged on Friday to push back against the threat of US sanctions against French companies doing business with Iran, in the wake of Washington’s withdrawal from the international nuclear agreement with Tehran.
The French government is seeking waivers and longer transition periods from the United States for companies such as Renault and Total, Finance Minister Bruno Le Maire said, while pressing for European Union measures to improve the bloc’s “economic sovereignty” in the longer term.
“It’s time that European countries opened their eyes,” Le Maire said on Europe 1 radio….