IT WAS A WHITE HOUSE ONCE, BEFORE OBAMA DEDICATED IT TO PERVERSION 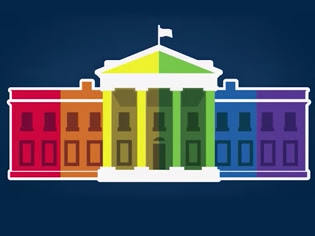 Rev. Franklin Graham is sharply critical of President Obama’s decision to dedicate a national monument to “the struggle for gay rights,” calling the landmark a “monument to sin.”

“Flaunting sin is a dangerous move,” Graham—the son of world-renowned evangelist Billy Graham—wrote in a Facebook post.
President Obama has selected the Stonewall Inn in New York’s Greenwich Village neighborhood for the first-ever national monument commemorating the battle for gay rights, reportedly because it is “the birthplace of America’s modern gay liberation movement.”
“War heroes deserve a monument, our nation’s founding fathers deserve a monument, people who have helped to make America strong deserve a monument — but a monument to sin?” asked Graham.
“That’s unbelievable,” he said.
In his post, Graham suggested that a move of this sort is indicative of the nation’s moral decline. “I can’t believe how far our country has digressed. I hope that the president will reconsider,” he wrote.

A monument to sin? I can’t believe how far our country has digressed.https://t.co/SNz3LFBW2C
— Franklin Graham (@Franklin_Graham) May 6, 2016

Graham is no stranger to LGBT activism, and has been an outspoken critic of efforts to legalize gay marriage as well as recent attempts to offer crossdressing men legal access to women’s bathrooms and locker rooms.
After the passage of a Charlotte, North Carolina’s city ordinance permitting transgender residents to use either a men’s or women’s restroom, Graham called the bill “wicked” and “filthy” and accused Charlotte Mayor Jennifer Roberts of putting the LGBT agenda above the protection and well-being of children, women and families.
Graham also said that “businesses and organizations shouldn’t be forced by law to allow men pretending to be women to use women’s restrooms.”
In 2015, when the Supreme Court ripped the question of same-sex marriage out of the hands of the American people and imposed it on the fifty states in its Obergefell v. Hodgesruling, Rev. Graham went on Sean Hannity’s radio show to denounce the decision. “Homosexuality is sin. Same-sex marriage is a sin against God,” he said.
At the same time, Graham was quick to insist that he wasn’t trying to single out homosexuality, but was just reacting to the move to legalize wicked behavior.
“I’m not here to throw stones at you because you want to marry someone of the same sex,” Rev. Graham said. “I just want to warn you, and I do this in love, that God will judge sin.”
“Lying is a sin, stealing is a sin, committing adultery [is a] sin. We’re all sinners, Sean, and Franklin Graham is a sinner,” he said.
“Our country has been slipping every year further and further away from the God of the Bible — the foundation that our nation was built on. We’re slipping away from that. And I believe that we need to do everything we can to warn people of the consequences of sin,” he said.
Rev. Graham is not the only leader to decry President Obama’s attempts to equate the LGBT cause with the Civil Rights movement of the 1960s.
“President Obama is a disgrace to the black community,” said Rev. William Owens of the Coalition of African American Pastors (CAAP) after Obama compared the movement for same-sex marriage to Civil Rights activism.
“He is rewriting history. We didn’t suffer and die for gay marriage. We marched for opportunity, equality, justice, freedom from oppression. We are the true heirs of the civil rights movement. We have a new movement to reclaim the ‘real’ civil rights movement,” he said.

Published on Jun 25, 2016
During Saturday’s Weekly Address about the designation of the Stonewall Inn as a national monument, President Obama stated America’s “story of progress” was written by people such as “Farmers and blacksmiths who chose revolution over tyranny. Immigrants who crossed oceans and the Rio Grande. Women who reached for the ballot, and scientists who shot for the moon. The preachers, and porters, and seamstresses who guided us toward the mountaintop of freedom.”

“Hi everybody. The story of America is a story of progress. It’s written by ordinary people who put their shoulders to the wheel of history to make sure that the promise of our founding applies not just to some of us – but to all of us.

Farmers and blacksmiths who chose revolution over tyranny. Immigrants who crossed oceans and the Rio Grande. Women who reached for the ballot, and scientists who shot for the moon. The preachers, and porters, and seamstresses who guided us toward the mountaintop of freedom.

One of these special places is the Stonewall Inn. Back in 1969, as a turbulent decade was winding down, the Stonewall Inn was a popular gathering place for New York City’s LGBT community. At the time, being gay, lesbian, bisexual, or transgender was considered obscene, illegal – even a mental illness.

One night, police raided the bar, and started arresting folks. Raids like these were nothing new – but this time, the patrons had had enough. So they stood up, and spoke out, and over the course of the next several days, they refused to be silenced. The riots became protests; the protests became a movement; the movement ultimately became an integral part of America.

Over the past seven years, we’ve seen achievements that would have been unimaginable to the folks who, knowingly or not, started the modern LGBT movement at Stonewall. Today, all Americans are protected by a hate crimes law that includes sexual orientation and gender identity. ‘Don’t Ask, Don’t Tell’ is history. Insurance companies can no longer turn you away because of who you are. Transgender Americans are more visible than ever, helping to make our nation more inclusive and welcoming for all. And one year ago this weekend, we lit the White House in every color – because in every state in America, you’re now free to marry the person you love.

There’s still work to do. As we saw two weeks ago in Orlando, the LGBT community still faces real discrimination, real violence, real hate. So we can’t rest. We’ve got to keep pushing for equality and acceptance and tolerance.

But the arc of our history is clear – it’s an arc of progress. And a lot of that progress can be traced back to Stonewall. So this week, I’m designating the Stonewall National Monument as the newest addition to America’s national parks system. Stonewall will be our first national monument to tell the story of the struggle for LGBT rights. I believe our national parks should reflect the full story of our country – the richness and diversity and uniquely American spirit that has always defined us. That we are stronger together. That out of many, we are one. That’s what makes us the greatest nation on earth. And it’s what we celebrate at Stonewall – for our generation and for all those who come after us.

Published on Jun 24, 2016
Almost five decades after the Stonewall Riots in New York City's West Village neighborhood, the tavern uprising which sparked the LGBT rights movement in the U.S. is now a national landmark.
President Barack Obama designated the Stonewall Inn and the surrounding streets as the nation's first monument for gay rights.
President Obama added that the national parks should reflect the country's full story, incorporating the rich and diverse American spirit.
Known as the Stonewall National Monument, the historic site incorporates almost eight acres of the local community such as Christopher Park.

Obama LGBT Monument: Will He Take All of NYC?
Published on Jun 27, 2016
Obama has declared Stonewall National Monument in NYC, site of the
Stonewall riots that began the gay rights movement. If he abused the
110 year old “Antiquities Act” in NYC, as he’s done in rural areas, he
would take all of NYC. We look at his LGBT agenda and how he applied
the law for the gay monument and compare it to his monumental fraud —
his UN Agenda 21 (now renamed the 2030 Agenda for Sustainability)
taking millions of acres under the pretense of the monument act.