OBAMA TRASHES THE U.S. AGAIN~WARNS OF AMERICA'S "PITFALLS" WHILE SPEAKING IN MALAYSIA 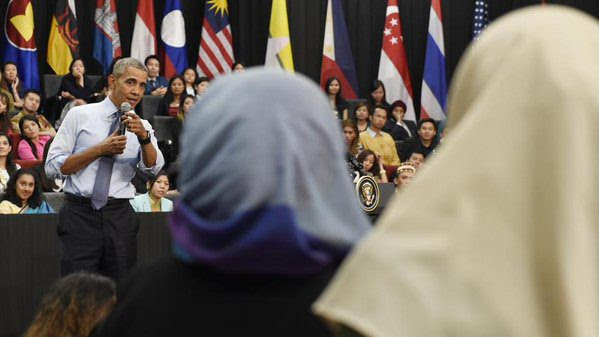 BY DAVID RUTZ
SEE:http://freebeacon.com/politics/obama-warns-of-americas-pitfalls-while-speaking-to-young-asian-leaders/; republished below in full unedited for informational, educational, and research purposes:

President Obama spoke to a group of young Southeast Asian leaders Friday in Malaysia and warned them about about avoiding the “pitfalls” the United States suffers from, the Washington Times reports.
Human Rights Watch says on its main Malaysia page that the country’s government has engaged in a “strong crackdown on civil and political rights, including charging organizers of peaceful demonstrations. Though he had promised to repeal the Sedition Act, Prime Minister Najib Razak pushed through amendments to strengthen it, as well as a repressive counter terror law.”
Obama, however, warned the leaders about such American weaknesses as racial divides, income inequality, harsh partisanship and a political system dominated by the wealthy.
“Right now, our political system does not work as well as it should,” Obama said. “And what I would say to young leaders, what sort of pitfalls should you avoid, I would say, number one, it is very important to avoid any political system where money overwhelms ideas. And the United States politics process has become so expensive and it lasts so long, and even though I was successful at it, we spend hundreds of millions of dollars in television advertising and in all the things that go into a U.S. presidential campaign.”
Obama added that politics in the U.S. was increasingly defined by “personal attacks and saying very sensational things to the media.” It should be noted that Obama reamed Republicans this week during his overseas trip, implying they were cowards for their rhetoric about putting a pause on Syrian refugees entering the country.
He also said the race issue in the U.S. “has been very prominent” historically and warned against organizing political parties or interest groups on ethnic lines.
Full exchange: