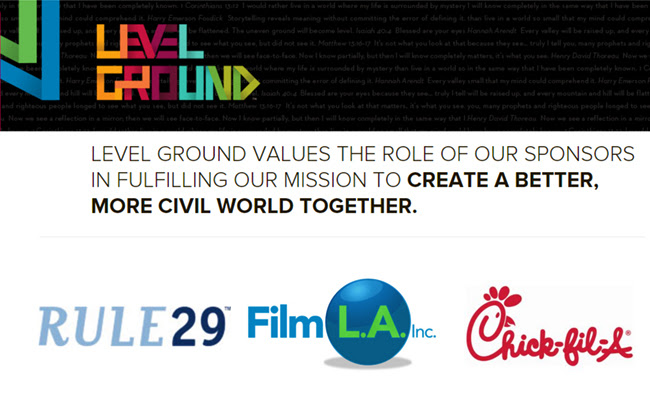 BY HEATHER CLARK
SEE: http://christiannews.net/2015/10/26/chick-fil-a-sponsors-faith-based-homosexual-film-and-arts-festival/; republished below in full unedited for informational, educational, and research purposes:

An online petition has been launched over revelations that the popular evangelical-owned fast food restaurant Chick-fil-A has been listed as a sponsor of a “faith-based” homosexual film and arts festival.
Level Ground began as a student-organized event in 2013, and was touted as the “world’s first faith-based LGBT film festival.” It has since expanded to six cities across the country and includes not only film, but music, theater, visual arts, comedy, and various workshops with the goal of “elevating the public discourse around the otherwise polarizing topics of gender identity and human sexuality.”
“The Level Ground Festival draws a unique audience that reflects the full spectrum of religious (and non-religious) beliefs, gender identities, and sexual orientations,” the festival website outlines. “All denominations, theologies, beliefs, races, and ages are welcome.”
Earlier this month, the Level Ground Festival opened in Nashville, being sponsored by the pro-homosexual Gracepointe Church and Vanderbilt Divinity School, among others. The event featured panel talks that included former Contemporary Christian artist Jennifer Knapp, who came out as a lesbian in 2005 and went on to found a homosexual advocacy group, as well as folk musician Derek Webb, known for his song “I Repent” and his former role in the Christian group Caedmon’s Call.
Other attendees included Melissa Greene, formerly of the group Avalon and worship leader at Gracepointe, and Karen Swallow Prior of Virginia’s Liberty University.
But Level Ground has general sponsors as well, which the group has posted on its website. Included on the page among Whole Foods, Hilton Pasadena, and Stone Brewing Company is the popular fast-food restaurant Chick-fil-A.
On Friday, a concerned Chick-fil-A patron launched a petition to bring the sponsorship to the attention of the company’s leadership.
“Per our research and findings, Chick-fil-A is a sponsor of ‘Level Ground’ … [a]nd upon further inquiry, your sponsorship of this organization supports pro-gay organizations … and many other groups that promote an agenda which is contrary to Chick-fil-A’s corporate stance on Christian values regarding marriage and stewardship,” the petition reads.
“In light of these findings, we ask that Chick-fil-A issues an official response regarding this sponsorship, along with any statement your team feels is necessary to clarify Chick-fil-A’s corporate stance regarding previously stated Christian values on marriage and stewardship,” it says.
As previously reported, Chick-fil-A came under fire in 2012 from homosexual advocates after President Dan Cathy spoke in favor of Biblical marriage.
“We are very much supporting of the family—the Biblical definition of the family unit,” he told the Baptist Press. “We are a family-owned business, a family-led business, and we are married to our first wives,” he said. “We give God thanks for that.”
According to the Washington Post, Cathy had also stated on a radio broadcast that he believed that the promotion of homosexual “marriage” was evoking the wrath of God upon America.
“As it relates to society in general, I think we’re inviting God’s judgment on our nation when we shake our fist at him and say, ‘We know better than you as to what constitutes a marriage,’” he opined. “And I pray God’s mercy on our generation that has such a prideful, arrogant attitude to think that we have the audacity to try to redefine what marriage is about.”
After the U.S. Supreme Court struck down a key part of the Defense of Marriage Act (DOMA), Cathy Tweeted, “Sad day for our nation. [The] founding fathers would be ashamed of our generation to abandon wisdom of the ages re: cornerstone of strong societies.” He later deleted the post.
Following uproar about the matter, including assertions that the company donates to organizations that oppose same-sex “marriage,” Chick-fil-A issued a statement outlining that it had never sought to donate to groups that speak against homosexuality, and that “[g]oing forward, our intent is to leave the policy debate over same-sex marriage to the government and political arena.”
“For many months now, Chick-fil-A’s corporate giving has been mischaracterized,” the fast food chain wrote in a separate news release. “Our intent is not to support political or social agendas.”
Christian News Network reached out to Chick-fil-A for comment and explanation regarding its sponsorship of Level Ground, but a response was not received as of press time.
______________________________________________________
SPONSORS LIST:
http://www.onlevelground.org/sponsors/
COMMUNITY PARTNERS:
http://www.onlevelground.org/communitypartners/
MEDIA PARTNERS:
http://www.onlevelground.org/media/
LEADERSHIP, MENTORS, THEOLOGICAL ADVISERS:
http://www.onlevelground.org/team/
Posted by John at 2:48 PM