COMING HOME UNDER THE "NEW EVANGELIZATION" PROGRAM:
VICAR OF THE FALSE SOCIALIST CHRIST LEADS RAUL CASTRO TO REPENT OF
CUBAN COMMUNIST GOVERNMENT
BAN ON RELIGION
NO BIBLICAL GOSPEL HERE OF PERSONAL REPENTANCE
AND TRUST IN JESUS CHRIST FOR SALVATION;
JUST MORE FALSE RELIGION
CASTRO PROMISES TO RETURN TO CATHOLIC CHURCH;
BOTH CHRIST DENIERS BUILD RAPPORT;
FIND COMMON GROUND IN REDISTRIBUTION OF WEALTH;
PREPARE FOR MEETING WITH OBAMA IN SEPTEMBER TO DEVISE PLANS TO STEAL FROM THE RICH AND GIVE TO THE POOR, UNDER THE GUISE OF "SOCIAL JUSTICE" 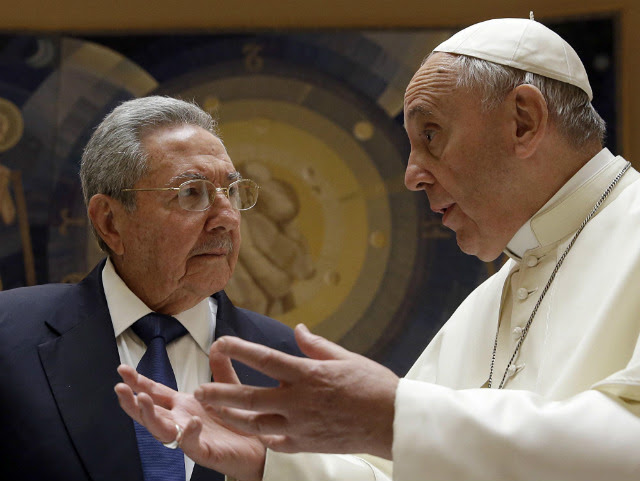 The Cuban President Raul Castro paid a special visit to Pope Francis in Vatican City on Sunday. The stopover comes ahead of the pontiff’s trip to the US and Cuba in September. The brother of the revolutionary leader Fidel Castro spoke with the Pope for 55 minutes. It is unusual for the Pope to meet with someone for such a long time and meetings on Sundays are also extremely rare. The Vatican said this was strictly private and not a state visit as the Cuban leader is on the way back from Russia. During their talk the Pope is understood to have highlighted the need to eradicate poverty around the world. At the end of the meeting Raul Castro gave Pope Francis a medal commemorating 200 years of Havana Cathedral and a painting by the Cuban artist Kocho. Castro is expected to meet with the Italian Prime Minister Mateo Renzi before leaving Rome. The first Pope to hail from Latin America helped broker an historic thaw between the United States and Cuba in December. The two countries agreed to restore diplomatic ties that Washington severed half a century ago.
Source: http://www.euronews.com/2015/05/10/cu...

SEE: http://www.thenewamerican.com/culture/faith-and-morals/item/20886-after-meeting-pope-communist-castro-considers-catholicism; republished below in full unedited for informational, educational, and research purposes:

BY:  Kurt Hyde and Alex Newman

After meeting with Pope Francis at the Vatican this month, Cuban dictator Raùl Castro was apparently so impressed that he claimed to be considering joining the Catholic Church. The May 10 audience lasted just under an hour but generated headlines — and criticism — around the world. Leader of Cuba’s dissident “Ladies in White” movement Berta Soler lambasted Castro’s comments about becoming Catholic as “a joke” — and for good reason, as Communism and Christianity are inherently opposed to each other. But the implications of the meeting are no laughing matter.
According to news reports, Pope Francis plans to visit Cuba in September, and the younger Castro tyrant has promised to attend his masses. “When the pope goes to Cuba in September, I promise to go to all his Masses, and with satisfaction,” Castro said at a press conference. “I read all the speeches of the pope, his commentaries, and if the pope continues this way, I will go back to praying and go back to the church, and I'm not joking ... I am from the Cuban Communist Party, that doesn't allow (religious) believers, but now we are allowing it, it's an important step.”
In discussing the pontiff, Castro said he had been “very impressed by his wisdom, his modesty, and all his virtues that we know he has.” Even his meeting this month was special, as audiences with the Pope on Sundays are very rare. Reuters reported the unusual exception was granted by the pope because Castro was returning to Cuba from Moscow and had the opportunity to stop in Rome while en route.
While the publicity photos of the papal audience project positive images, recent reports of Cuban refugee escapes paint a very different picture. This past Labor Day six men, escapees from Cuba, landed on South Padre Island in Texas. They made their perilous 1,200 mile voyage in a 14-foot wooden boat. An article posted on the New York Times website on October 9, 2014 related details of recent escapes from Cuba. One such escape by Leonardo Heredia was his ninth attempt. Heredia and 21 friends made a boat from scrap stainless steel and plastic foam. They powered it with a Toyota engine and navigated with a hand-held GPS.
The same article featured an interview with escapee Yannio La O, who teamed up with 31 others to escape from the workers’ paradise in a home-made boat. According to La O, nine of them, one a pregnant woman, died and had to be cast overboard. Six of them got on inner tubes and are unaccounted for. Two more died after making shore. La O said he survived by eating fish he had speared and drinking urine. Drinking seawater would have been fatal. Despite the ordeal, La O was quoted in the article saying, “I would tell anyone in Cuba to come. It’s better to die on your feet than live on your knees.”
Reverend Rafael Cruz, father of U.S. Senator Ted Cruz (R-Texas), was the guest speaker at a meeting of the Carrollton Tea Party in Carrollton, Texas on September 23, 2014. Rev Cruz related in detail one of the tricks used by the Castro regime in Cuba to indoctrinate kindergarten children against God. The pseudo-scientific proof that there is no God consists of having the children pray unsuccessfully to God for candy and then successfully make the same prayer to Fidel Castro. In other words, government is seeking to replace God, he explained.

Reverend Cruz also mentioned his contact with Virginia Prodan, who confirmed this practice was used by the Ceausescu regime in Romania. How these worldviews can be consistent with Christianity is a mystery. As Pope Pius XI put it, “No one can be at the same time a sincere Catholic and a true socialist.”
Pope Emeritus Benedict XVI visited the enslaved island of Cuba in 2012 and had harsh words about communism, too. “Today it is evident that Marxist ideology in the way it was conceived no longer corresponds to reality,” the Pope told reporters on the plane before his visit. “In this way we can no longer respond and build a society.”
He also said he was close to those “deprived of freedom,” widely interpreted as a reference to the communist regime’s scores of political prisoners and dissidents, before offering the church’s assistance to Cuba in transitioning toward “authentic freedom.” “We want to help in a spirit of dialogue to avoid traumas and to help move forward a society which is fraternal and just, which is what we desire for the whole world,” he said. “It is obvious that the Church is always on the side of freedom, on the side of freedom of conscience, of freedom of religion, and we contribute in this sense.”
Critics, including many conservative Catholics, have expressed concerns over some of Pope Francis’ rhetoric, and, more recently, his joining with the United Nations “sustainability” crowd. Whether or not he will be as firm as his predecessor on Cuba remains to be seen. Perhaps an even bigger question, though, is whether Castro is willing to acknowledge that God — not his murderous communist regime — is supreme and sovereign.
_____________________________________________________


New Pope Is A Pure Marxist; Calls for "Carbon Tax"; Praises Mahmoud Abbas as an "Angel of Light"

Published on May 22, 2015
Pope Francis praised Palestinian President Mahmoud Abbas as an “angel of peace” during a meeting Saturday at the Vatican that underscored the Holy See’s warm relations with the Palestinians.
http://www.infowars.com/pope-calls-pa...